As one can feel on their faces and hands the Seasons are changing and the Winter chill is just starting.  Often there is a night or perhaps two where the air and world is so quiet and still that the Shadows and the Night itself starts to hum in your blood.  This Autumn, for two weeks now, the hum has almost been a faintly hollow song:  No words just the almost sibilant whispers like a lover stroking your back in the dark.  I am hoping that this is being felt by others and not just in my small piece of the world.  This is a blessing and experience we all must remember in order to survive the coming seasonal crush.  And to have this night after night is awesome if nervously anticipatory as well.

As promised I went to the Hamilton Geode Festival near the end of September and it was a riot of a time.  We couldn’t get a hotel any where near Hamilton or Keokuk so we stayed in Ft Madison.  The Knight’s Inn in Ft Madison was absolutely lovely and I recommend them to anyone staying near.  This town has graveyards through out, rather like the scattered bones of a disinterred body, and would be a lovely rural trip for cemetarians. There was a profound sadness throughout Ft Madison as though bits and pieces of all the people were slowly being forgotten and the remainders left behind were just pale imitations of their former selfs.  This pall over the town was slowly encroaching into Keokuk and Hamilton as seen by for sale signs on store fronts and homes: giving a farmer twenty bucks for a bucket of geodes was much easier this time.  We pulled up to the Chaney Creek boat access that Friday morning and were worried because there was a noted lack of people and children and dogs: Apparently all it took was one year for us to forget that Friday morning is always more relaxed and empty. The gem club that has faithfully run the Geode Fest since it’s start finally gave up control and this year the Chamber of Commerce was taking the reigns.  The sign up sheets and announcement signs were greatly improved and the food coach that was rather shady was blessedly absent.  The club was smart to give the reigns over because the second dig for Friday and all that Saturday were a mad house of cars and people blocking other cars:  Congratulations Chamber of Commerce the head ache is now yours, I’ll just stand over here and collect geodes.  Our first run was through Barrows Pit and this year was dramatically different.  Last year was on the right side and this year was on the left and goodness gracious what a difference a side can make.  The left  side had geodes coated in black hematite on the inside this year and the most awesome geologic presence in that a very long time ago that side of the field had been crushed and the crystals on football sized and larger geodes had been pushed in then slowly annealed and grown back together by a very thin bridge of quartz.  These may not be the perfect globes most people want but I snagged several just to admire!  Renards was of course a treasure trove on Friday afternoon and the string of cars driving out was like this little chain of colored automobiles with blinking lights pulling its self along side roads and fields.  Age and a failed alarm clock took us out of Saturday mornings’ digging but we easily snagged a place in the way-back of the boat access to park for the afternoon dig. We tried the Cooper farm for the first time and we had great success once I finally just waded in and got knee deep in the water.  Next year if we spend another half hour there I hope to haul in some more of the agate too. We talked to a fellow from last year who had his Husky again and what a difference!  Last year we were all sweating and chugging gatorade and his Husky never left the river, this year we all had jackets on while clutching coffees and the Husky only went in up to his belly.  Another Lady RockHound went in up to her arm pits and had bowling ball sized geodes out of the river. (Understand, that while I vend and craft some stones, this trip is for fun, personal collecting and we really spent no more than one hour at any of the places.  Our efforts were also leisurely.  So any one that tries and tell you that the Keokuk Geode Fest is “all played out” either has no idea what a geode is or is delusional.). Well done Folks of Keokuk, see you next year. 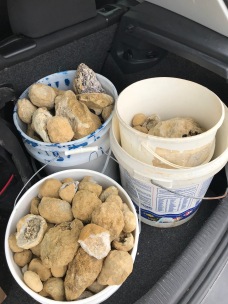 So many of my friends that I love and admire, as well as myself, are vending at Autumn and Winter Festivals that I send you all sincere prayers and hopes for financial as well as reputation success.  Please, Gentle Readers, buy local and buy small business as best you can for the Holidays:  Your purchase is keeping somebodies lights on and dreams alive. Web site:  http://www.bones-of-the-earth.com and Etsy: https://www.etsy.com/shop/EarthsBones?ref=search_shop_redirect

Today it is half way through October and the weather over all has been gentle and warm for the Mid-west.  My Death Migraine has released enough of it’s hold to allow me to type.  The weather tonight is forecast at 29 degrees and right now the warm sunshine is setting itself into the horizon while a constant bluster of cold wind blows.  We soaked up as much of the late sun as we could today and for this Winter Flower it has been enough. The Orionid meteor shower is at its height tonight and tomorrow and the temperature dip will hopefully keep the night sky clear.  I must say that the moon has been brilliant lately, bringing to life the night shrouded Buckeye trees and yellowing leaves along the darkened sidewalk.

Until the next post may God hold you in his hands and the earth sing in your blood,

One thought on “Keokuk FanGirl and Shop Small”